The Trump presidency would not have been possible without financial support from wealthy donors and endorsements from public figures. While it is understandable to offer support for one’s political ideals, it can be a fine line that separates acceptable support from a potential conflict of interest.

The following “contributors” may not currently warrant a total boycott on their businesses and ventures, but it is wise to be aware of where the money you spend will ultimately land. 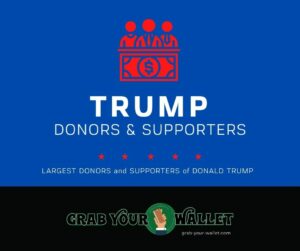 It’s amazing that anyone can think that Trump is “draining the swamp” after noting the lack of qualifications (other than the open checkbooks) of these cabinet picks. What it does resemble is a plutocracy.

Mar-a-Lago is a Trump property that has been dubbed the “Winter White House” and “Southern White House”. Trump often spends taxpayer funded time at the property that requires membership costing thousands of dollars.

Donor and endorsement information from online sources including opensecrets.org, investopedia.com, and politico.com.

Share on social media and help stop the flow of money and power to this dangerous fringe that lives outside of reality. Share any updates (requests for additions or removals) with a linkable source in the comments below.

To learn more about where Trump makes money that supports his policies, visit these additional boycott pages: